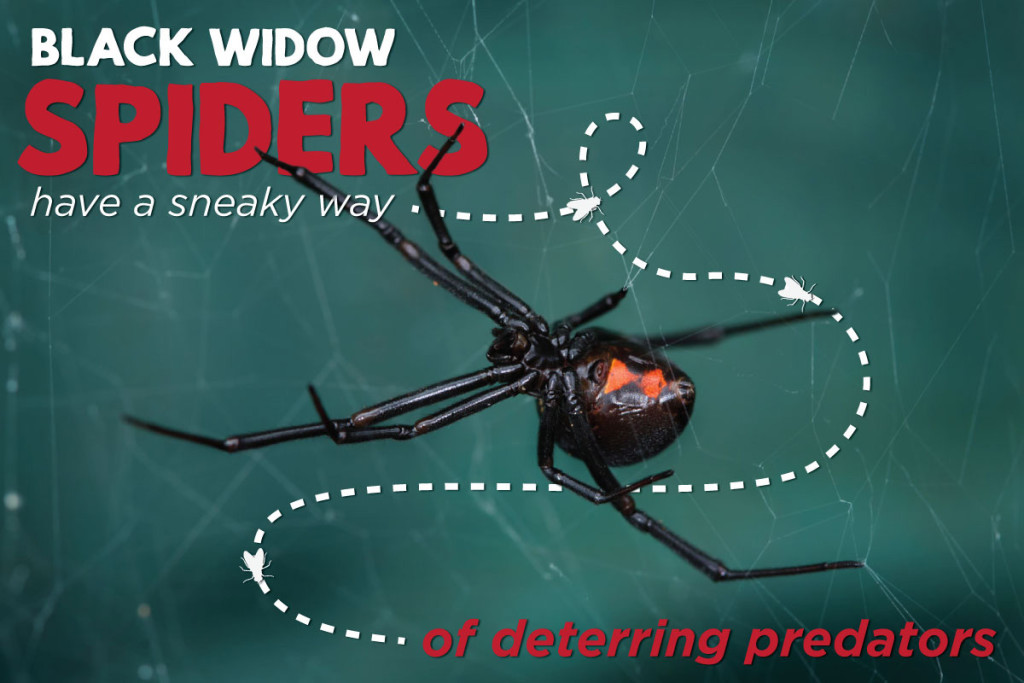 Luckily for humans highly venomous spiders such as the Redback Spider (Australian) and Black Widow Spider (US) have antivenoms but unsuspecting insects may not be so fortunate. A recent study by Duke University in North Carolina has discovered these toxic spiders are able to fool some animals simply because their red- and-black telltale markings can’t be detected.

Normally spiders are an appetising meal for many birds including blackbirds, sparrows and crows because spiders contain a large amount of taurine – an amino acid good for maintaining eyesight and brain development. Some birds are brave enough to have a Redback or a Black Widow Spider for lunch but most can’t handle the toxicity of the poison. The bright red markings, therefore, are a warning to birds that this spider isn’t to be messed with and to leave well alone.

But why aren’t insects similarly warned? The Duke University study experimented with fake plastic Black Widow Spiders to find out why. They placed eight fake spiders onto separate backyard bird feeders in North Carolina. Half were painted completely black; the other half had the red markings of the Black Widow. The spiders were created by 3D printing from a video game template to make them look as lifelike as possible.

The researchers found that the birds were three times less likely to approach a Black Widow Spider than the all¬black type. The red markings were clearly a warning, especially to smaller birds who immediately jumped back. Next, with the help of a spectroradiometer the researchers measured the spectral output of the light reflected by a couple of the Black Widow species in North America. A spectroradiometer is an instrument that can measure wavelengths of just about any light with extremely high accuracy. With this information, they then calculated how much light birds and insects would be able to absorb with their respective photoreceptors.

The researchers discovered that birds have twice the ability to pick up the contrasting red-and- black colours of the spider because they have a greater sensitivity to long wavelengths of light. Insects, since they cannot efficiently detect red light, are not able to pick up the warning colour of the spider’s markings as well as birds, making them more susceptible prey.

The way the spider displays its markings also plays a role in the effective concealment of its dangerous presence, researchers concluded. Black Widow Spiders generally hang underneath their webs so their bellies with the red hourglass marking are easily seen by birds flying overhead, but not by insects crawling beneath.

The Many Uses of Citronella

Why Pest Control Shouldn’t Only Be When Selling Your Home