Are birds pestering your business? You’re not alone. Each year, thousands of Australian companies report having issues with birds. Being infested by birds can be a serious health risk for your workers and customers. Risks can include disease and infection, structural damage and noise pollution, just to name a few. Commercial bird control helps maintain your reputation and keeps your location clean and hygienic.

Bird infestations are known to be extremely difficult to handle without professional assistance. You can shoo them away as much as you like, but as long as your building provides suitable cover, they will return over and over again.

Luckily there are several commercial bird control options that will provide long-lasting protection for your business, warehouse, office, factory or any other building you operate out of. Read on to discover an option that is the best fit for your business.

Why Are Birds An Issue?

Birds are an important part of our ecosystems, however some species, especially non-native invasive birds like Pigeons, Swallows, Sparrows, Indian Mynas and Crows, create problems for people and the environment.

These species breed quickly and can infest the buildings they use for cover. An infestation of birds can make your place of work unhygienic and potentially dangerous to be near.

Once they make a home in your building, they are increasingly hard to get rid of since they’ll simply want to rebuild even if you remove their nest. The best method is to implement bird deterrents in your commercial building.

Cure All Can Set Up

Want a humane deterrent to stop birds from nesting in your building? Swallows and martins build mud nests, and their go-to spot is right under your roof. Cure-All can install bird sloping to your home to deter nesting birds without harming them. It simply makes it impossible for them to land where they would want to build a nest.

Bird-proof netting is one of the most popular commercial bird control options for large areas. Most frequently used in warehouses or large open spaces, netting deters prevents birds from landing in areas where they’d want to roost or nest. It is also the most permanent and cost-effective solution. Bird netting is also helpful in preventing nesting under or near solar panels.

At Cure-All Pest Control, we’re trusted to handle netting jobs of any size. We handle big jobs that other pest control companies put in the ‘too hard’ basket. We’ve installed durable netting systems for a range of commercial buildings and can protect your building from pesky birds.

Spikes are designed to be longer than a bird’s legs, making it uncomfortable for them to land. They may look scary, but the chance of a bird injuring itself on the flexible and blunt metal rods is near zero.

This commercial bird control measure is often considered to be quite unsightly, so it is used sparingly. Still, the method is effective and can be hidden from public view along pipes, on roofs and at the top of walls. It is ideal for spot protection where netting cannot be installed.

Some invasive bird species will harm the biodiversity of your area. Species such as Indian Myna are known to take over the homes of protected native species. To remove Indian Mynas and similar invasive species, it is permitted to trap them.

Bird wire provides an unstable landing area typically on rooves, ledges, parapets and other landing spots. These are less effective for smaller species that can slip between the wire and ledge. Cure-All can install sprung wire systems for smaller areas and flexible floppy wire to cover larger areas.

Shock treatment is not fatal. While the treatment seems extreme, it simply discourages birds from roosting by delivering a small electrical shock. The shock is delivered through a low-profile metal track that conducts a harmless electrical pulse that makes the birds uncomfortable. Best of all, the tracks are flush with the surface where birds may land, so it’s quite attractive to the eye.

Every pest problem is different. Because of that, Cure-All Pest Control makes sure to construct a custom strategy for your issue. We utilise a range of other bird removal methods depending on the variables of your specification. See more about our other services here.

Protect Your Business From Birds

Cure-All Pest Control is one of Brisbane’s leading installers of commercial bird control systems. If you’re sick of sharing your place of work with pests, contact us right away to discuss which protective system is right for you. 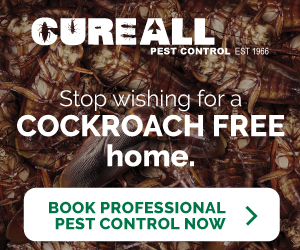 Pests That Are Most Active In Floods – Before, During & After

What Pests Are Most Common In Brisbane City